2019 July 1: registration of pharmacies and medical institutions commenced in the Chestnyy ZNAK system for medications from the list of high-cost nosologies.

2019 October 1: serialisation became mandatory for medications in the list of high-cost nosologies. 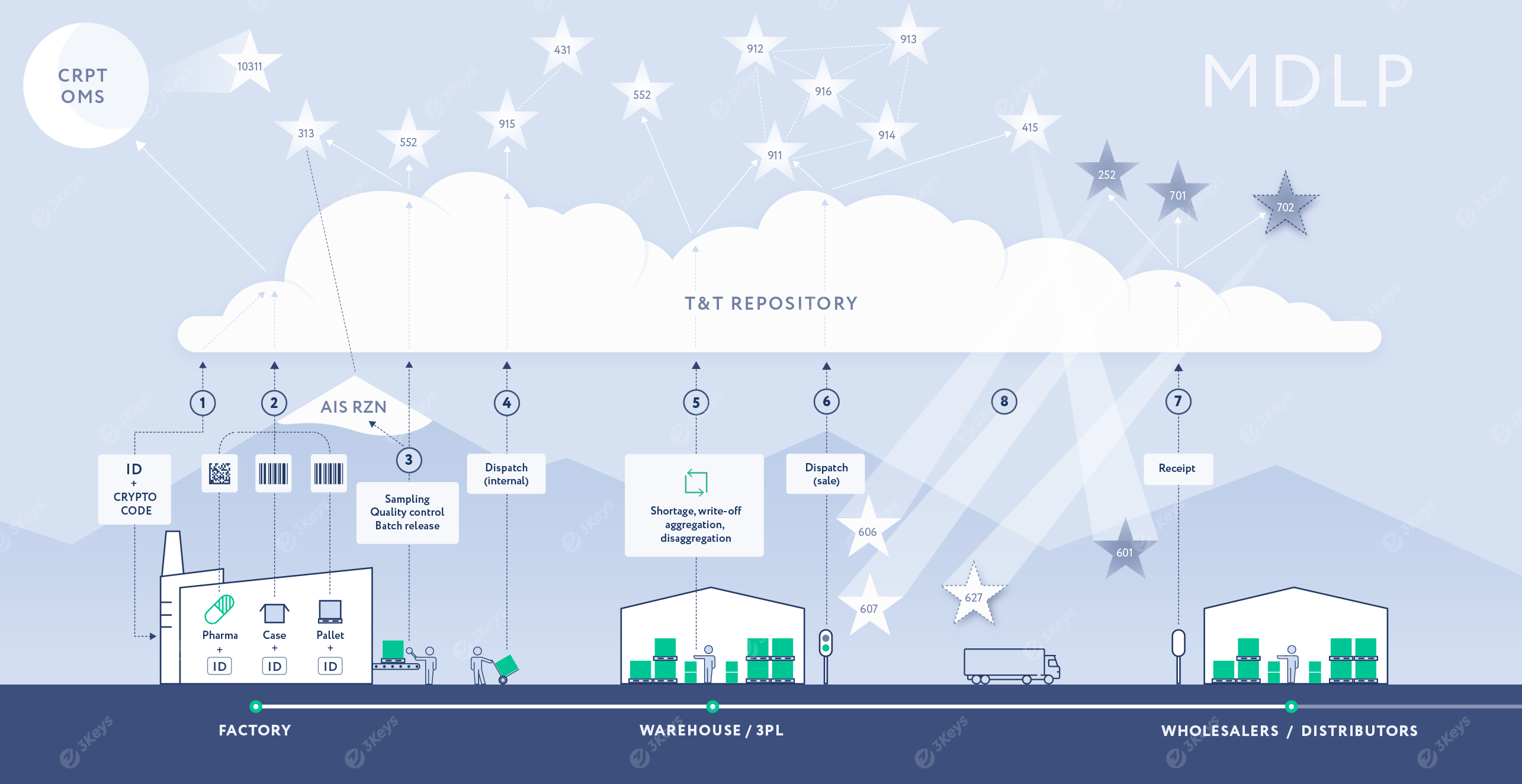 These serial numbers are encoded into Data Matrix codes and applied to individual consumer packages. This process makes them serialised. The packages are placed into cases and other forms of containers and are then further aggregated into pallets. Each level of a container is labelled with unique SSCC codes assigned by the manufacturer. Codes are associated in a parent/child structure. Based on this information, a utilisation report is submitted to OMS. The OMS system sends a 10311 message with the same content to the MDLP system.

Once quality control procedures are completed and lot data is registered in AIZ RZN, the batch release is reported to MDLP with a 313 "Register product emission" message.

Internal movements are reported to MDLP via a 431 "Move place" message when the dispatch is registered.

At any given point in the supply chain, the product aggregation can change. When this happens, it is reflected in the repository and reported to MDLP with a combination of 91x series messages. Likewise, products can be written off for various reasons, such as damages or shortages, and reported using the 552 "withdrawal" report.

The sales process will be reported to MDLP via a 415 "Move order" message along with aggregation when the dispatch is registered and pricing data is available in the system.

The wholesaler confirms receipt (in the case of direct acceptance) by sending a 701 "accept" message. The wholesaler can also reject the full or partial shipment with a 252 "refusal receiver" message.

Once the wholesaler confirms receipt (in the case of direct acceptance), the confirmation will be received on the dispatch side.

The serial numbers and crypto codes are encoded as GS1 Data Matrixes and applied to the individual end-consumer packages. The packages are aggregated to cases and then to pallets, each of them labelled with a unique SSCC bar code. Once the production order is closed (or after batch release), the full hierarchy of codes is passed to the T&T repository. The list of serialised consumer packages is reported back to OMS along with the batch and expiration date information. The OMS system sends a 10319 message with the same content to the MDLP system.

During the quality control process (as well as during further logistics processes), certain packages can be identified as not being permitted for further sales and are reported to the MDLP system via the 552 "withdrawal" message.

**During the dispatch process, when the serialised pallets, cases, or individual packages are loaded and shipped to Russia—either from the production facility or a distribution centre—each top-level serial number is scanned and reported to the T&T repository. The full hierarchy is reported to MDLP by the MAH via the 915* "multi-pack" message, followed by a 331 "foreign shipment" message, which specifies the Russian importer as the receiving party. The importer is notified of the shipment via MDLP by the 613 "Foreign shipment notification". If needed, the receiver can retrieve the full hierarchy of serial numbers packed inside the reported SSCCs from MDLP.

The importer reports the 335 "FTS data" to MDLP with a list of cleared SSCCs and the GTD number. MDLP verifies the information with the Federal Customs Service. If any serialised items have been sampled at the customs warehouse, these items are reported to MDLP via the 552 "withdrawal" message. The appropriate combination of 91x messages is used to reflect the hierarchy changes in MDLP.

The products are moved from the customs warehouse to the importer's warehouse or 3PL location. This movement is reported to MDLP via a 341 "Receive importer" report.

Quality control certifies that the imported batch can be released to the market and enters the data into the AIS RZN system.

The top-level serialised containers are reported to MDLP as being introduced into circulation via the 342 "Release in circulation" message, referencing the document number re-exported to AIS RZN. The MDLP verifies the data with AIS RZN, and the goods are made available for further sale within the local supply chain.

* 915 can also be reported at any earlier stage, in which case any further aggregation changes need to be reported separately.

**(4) and (5) describe the “direct acceptance” process. The “reverse acceptance” process is also available, in which case the receiver (importer) replies with the 332 “foreign import message”, and the product MAH confirms the shipment via the 701 “accept” message. If the importer and the MAH are the same legal entity, a single 333 report is sent to MDLP upon importing the goods instead of the message sequence described in (4) and (5). 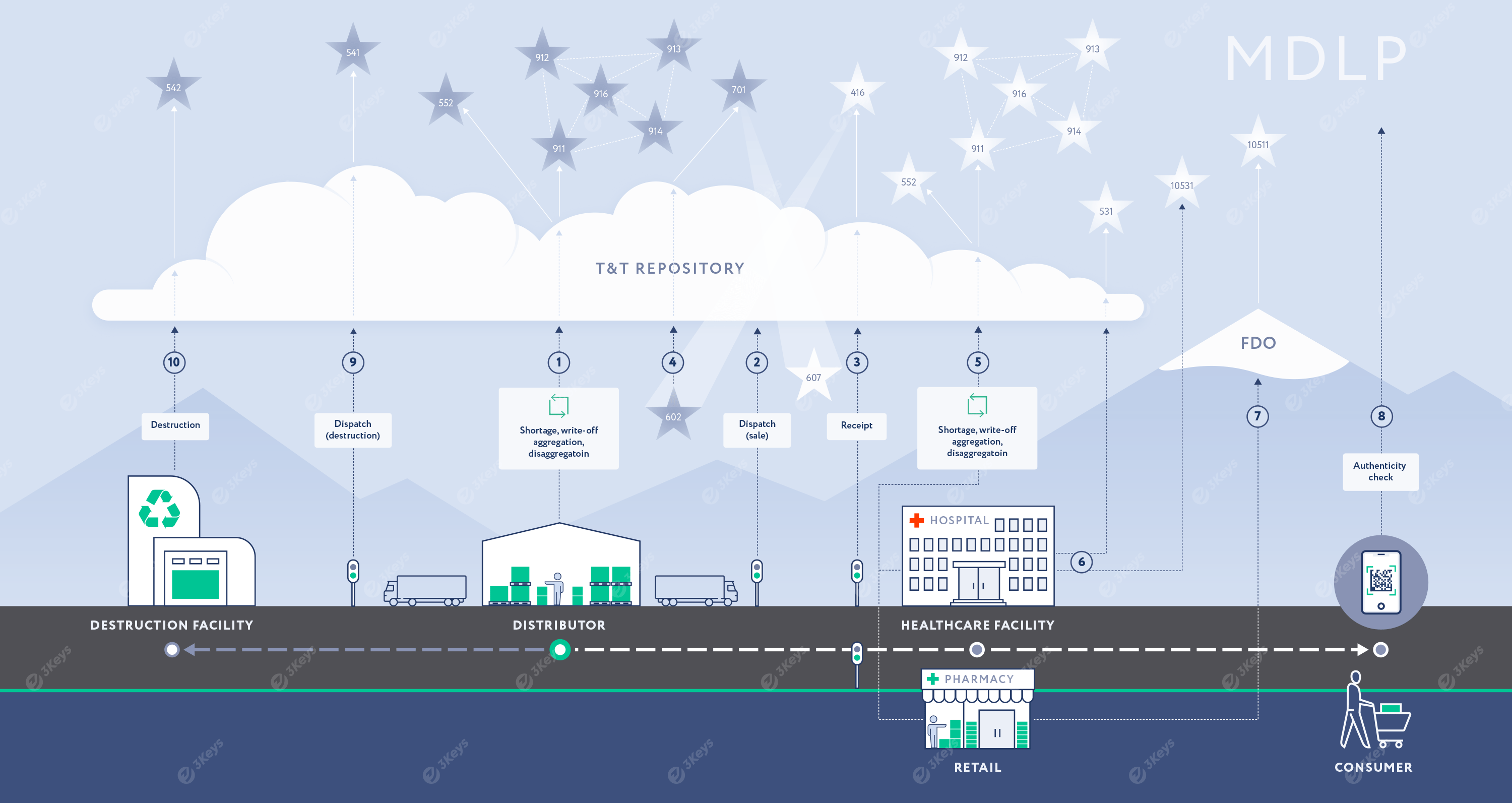 1
The distributor receives serialised products from the supply chain partner in pallets, cases, or as individual packages (SGTINs). As part of internal warehouse processes or during outbound delivery picking, the distributor can change the packaging hierarchy and report these changes to MDLP, including fully unpacking existing containers (912), extracting individual items (913), creating new containers (911), and adding new items (914, 916). If a shortage is identified for individual items, their serial numbers are reported to MDLP with a 552 "withdrawal" message.
2
The serialised goods are sold and dispatched to the customer (in this example, a pharmacy chain or healthcare facility).
3
Upon receiving the shipment, the customer scans the top-level objects and reports them to MDLP via a 416 "Receive order" message. The distributor is notified of the received serial numbers via MDLP by the 602 "Receive order notification."
4
The distributor confirms the shipment by sending a 701 "accept" message, completing the change of ownership process in MDLP.
5
Likewise, the process (1) at the distributor, healthcare facility, or pharmacy can perform aggregation changes and write-off shortages.
6
When the individual serialised package is provided to a patient at a healthcare facility (or dispatched to a particular section or ward), it is reported to MDLP using a 531 "Health care" message or via a specialised scanning device provided by CRPT, which results in the 10531 message. This serial number is considered to be out of circulation.
7
When the serialised package is sold at the pharmacy to the end-consumer, the Data Matrix is scanned at the POS. The unique serial numbers are included in the electronic cash receipt, which is sent via a Fiscal Data Operator to MDLP (10511 report).
8
Any consumer can scan a Data Matrix code with a phone app to verify the authenticity of the product and learn more about its origin.
9
In the event damaged or expired goods need to be destroyed, the distributor (or any other supply chain participant) ships the serialised goods to a licensed destruction facility. This movement is reported to MDLP via a 541 "Move destruction" message.
10
Once the goods are destroyed, the serial numbers are reported as destroyed (with reference to the appropriate document details) via the 542 "destruction" message.
Back